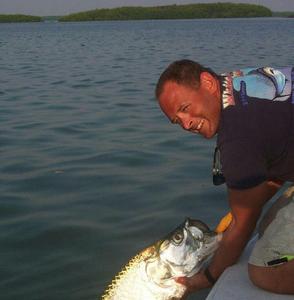 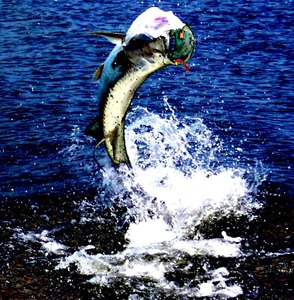 Tarpon (“Silver King”) Islamorada Tarpon Fishing offers the ultimate in a shallow water big game fishing. During the Islamorada Tarpon spring migrations, fish can average from 80 to over 150 pounds. Islamorada Tarpon can be found rolling and feeding in deep Florida Bay backcountry finger channels, in shallow grassy basins or along the edges of bars and flats in 4 to 6 feet of water. Tarpon tend to prefer water temps in the mid 70's for the channels and usually need 78-79 degrees for the Islamorada flats. The big Islamorada Tarpon are here in good to excellent numbers from March through July and small tarpon 8-20 pounds are here year-round, disappearing during cold fronts in winter. The Atlantic Tarpon, Megalops atlanticus, inhabits coastal waters, estuaries, lagoons, and rivers. Tarpon feed almost exclusively on schooling fish and occasionally crabs. It is capable of filling its swim bladder with air and absorbing oxygen from it, like a primitive lung.This gives it an advantage when oxygen levels in the water are low. Tarpon have been recorded at up to 250 centimetres (98 in) in length and weighing up to 161 kilograms (350 lb). The Atlantic tarpon is also known as the silver king. In appearance, Tarpon are greenish or bluish on top, and silver on the sides. The large mouth is turned upwards, and the lower jaw contains an elongated bony plate. The last ray of the dorsal fin is much longer than the others, reaching nearly to the tail. The Atlantic tarpon is found in the Atlantic ocean typically in tropical and subtropical regions, though it has been reported as far north as Nova Scotia and the atlantic coast of Southern France, and as far south as Argentina. As with all Elopiformes it is found in coastal area, spawning at sea. Diet includes smaller fish and crustaceans. Tarpon are considered one of the great saltwater game fish, not only because of the size they can reach and their accessible haunts, but because of their fighting spirit when hooked; they are very strong, making spectacular leaps into the air. The flesh is undesirable and bony. In Florida and Alabama, a special permit is required to kill and keep a tarpon, so most tarpon fishing there is catch and release. Although a variety of methods are used to fish for Islamorada tarpon (bait, lure and fly on spinning, conventional or fly rod), the method that has garnered the most acclaim is flats fishing with a fly rod. It is a sport akin to hunting, combining the best elements of hunting with fishing. A normal tarpon fly rod outfit uses 10-12 weight rods and reels, spooled with appropriate line and using a class leader tippet of 12–20 pounds (5.4–9.1 kg); truly light tackle fishing where the fish may weigh 10 times or more than the breaking strength of the leader. Typically an angler stations himself on the bow of a shallow water boat known as a 'flats skiff' and with the aid of a fishing guide searches for incoming tarpon on the flats (inshore areas of the ocean that are very shallow, typically no more than 3–4 feet (0.91–1.2 m) deep). When a school or pod of tarpon is sighted, the Islamorada guide positions the boat to intercept the fish. The angler usually has no more than 6-10 seconds to false cast out enough flyline and make an accurate cast to these fast moving fish. Accuracy and speed are paramount but the task is compounded by the inevitable excitement and nervousness of seeing a school of fish that may top 180 pounds (82 kg) bearing down on the angler. Once the cast is made, the fly is retrieved and hopefully a tarpon inhales the fly. The hookset is difficult due to the hard mouth of the fish which has been likened to the hardness of concrete. For that reason many tarpons throw the hook on the first few jumps and so many times it is asked of an angler "how many tarpon did you jump?" rather than how many they caught. If the hook stays secure, then the fight is on. Tarpons have tremendous endurance and are one of the most exciting gamefish to fight - frequent spectacular jumps, long runs, and stubborn bulldogging are all part of the game. Although an experienced and skillful tarpon angler can usually land a tarpon in less than an hour, the average angler usually takes longer, anywhere from an hour to more than three hours. Another popular method is using lures or bait on heavy spinning or conventional gear. Many anglers prefer this as a more surefire method to catch tarpons. Usually the reels are filled with line from 30 to 80 pounds (14 to 36 kg) test although 50 pounds (23 kg) seems to be the most popular. Although a great deal of fun, the outcome is less often in doubt, unlike fly fishing with light 20 pounds (9.1 kg) test, and getting a tarpon to take a crab, mullet or pinfish is easier than an artificial fly. Despite its namesake, the Atlantic tarpon is not limited to one body of water or exclusive to the east coast. In their northern migration, tarpons range through the Florida Keys and gradually make their way up the west coast of Florida and on to the Texas coast. on The attraction for the tarpons is the smörgåsbord of crabs and baitfish that are washed through the pass on an outgoing tide. The tarpon only need to position themselves along the bottom and gorge themselves as they attempt to avoid angler's seeking to fool them into taking an offering with a hidden hook. Numerous tournaments throughout the season, running from May through early August, attracts anglers from throughout the world. 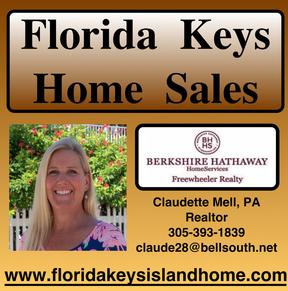